As Science Develops, More Holes Show up in Evolutionary Theory

More than 1,100 scientists and researchers in chemistry, biology, medicine, physics, geology, anthropology, paleontology, statistics, and other fields have signed a scientific dissenting statement against Darwinism. The statement says, “We are skeptical that ‘random variation’ and ‘natural selection’ can explain the complexity of life. A serious review of the evidence for Darwinism should be encouraged.”

Even though evolution has long been included in science textbooks, it is still a controversial topic.

First, evolution is a hypothesis, not an axiom.

Biologist Charles Darwin proposed the theory of evolution in 1859. At that time, Darwin wrote “The Origin of Species” to explain biodiversity on earth and the origin of life. He said that “evolution theory is only a hypothesis, it is not an axiom, it needs to be further verified by future generations.”

There are several central points in the theory of evolution:

3. Natural selection: The natural environment brings pressure to the species. The ones that can adapt to the environment can survive. The strong can survive, the weak are eliminated.

However, as of April 2020, more than 1,100 scientists and researchers in chemistry, biology, medicine, physics, geology, anthropology, paleontology, statistics, and other fields have signed a scientific dissenting statement against Darwinism. The statement says, “We are skeptical that ‘random variation’ and ‘natural selection’ can explain the complexity of life. A serious review of the evidence for Darwinism should be encouraged.”

Why do scientists question evolution?

Q1. Life originates from the “same ancestor”? What about the missing link in the evolution chain?

We often hear that “humans evolved from apes.” The theory of evolution suggests that humans and monkeys share a common ancestor —”apes” or “hominids”—and that humans first evolved from plants to animals, apes, and finally to modern humans—”Homo sapiens.” If this is the case, the evolutionary process must have created countless generations of intermediate species with minimal differences. But so far, no such intermediate species have been found in archaeology, and all creatures are of their own kind. No hypothetical “ape” ancestor has been found.

Some so-called “human ancestors” fossils are actually made up of bone fragments, which are not scientifically sound and do not provide complete proof that humans evolved from apes. 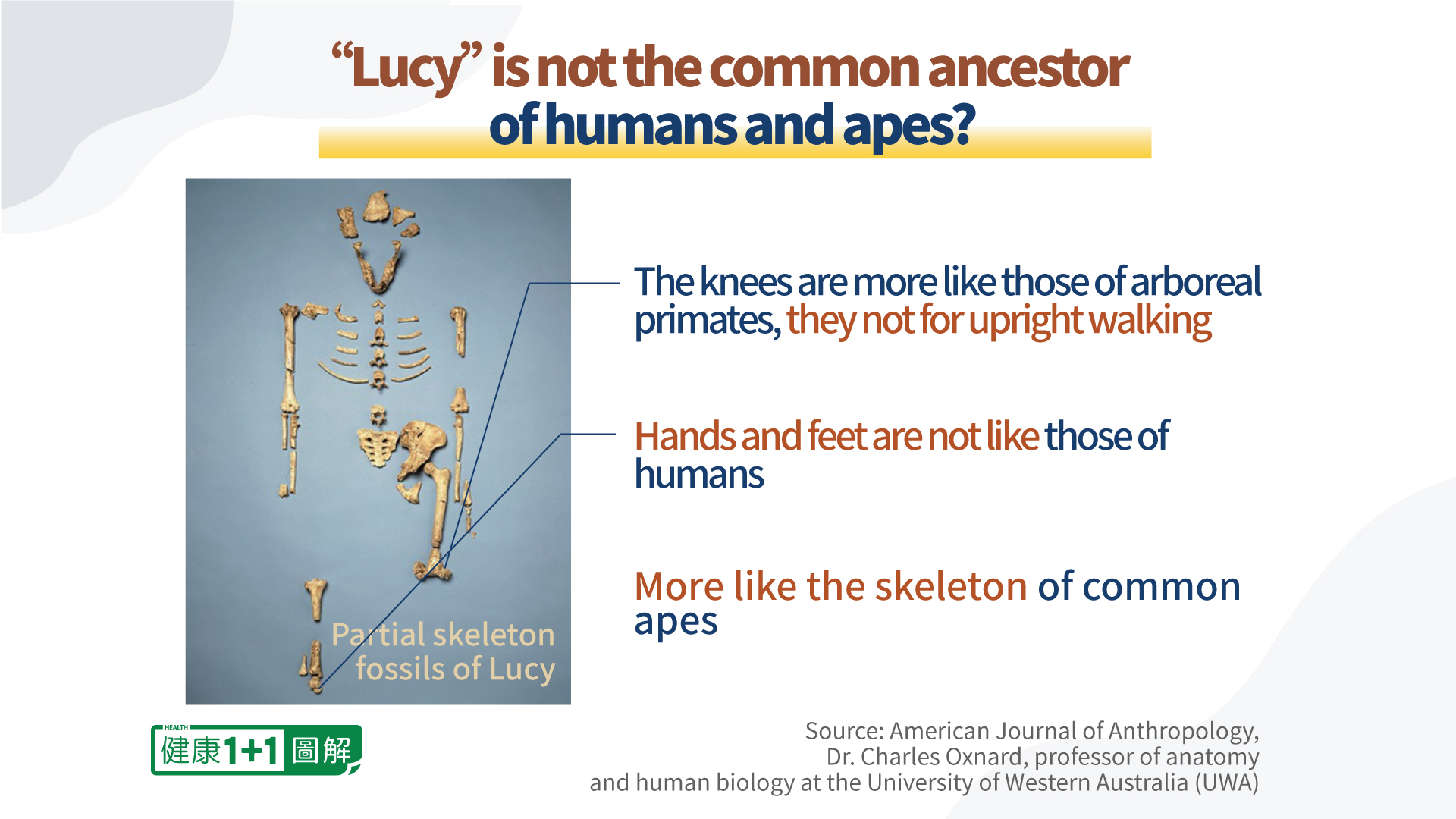 “Lucy,” discovered in East Africa in 1974, was considered the common ancestor of humans and apes—the “Ape Ancestor.”

Many scientists have studied Lucy’s skeleton and structure.

Dr. Charles Oxnard, professor of anatomy and human biology at the University of Western Australia (UWA) and professor at the University of Chicago and the University of Birmingham in the United Kingdom, wrote in his 1987 book published by the University of Washington Press “Fossils, Teeth, and Sex: New Perspectives on Human Evolution” that Lucy had nothing to do with the ancestors of humans, but was a type of extinct ape of the “southern archaeopteryx Alfalfa species,” which had the long, curved fingers and toes typical of arboreal primates.

Despite this, Lucy was made into a statue, with human hands and feet, and placed in the park.

The Piltdown Ape was a fossil found in England between 1908 and 1915, and was described at the time as the “missing link” in the evolution of apes into homo sapiens. In November 1953, Time magazine published various evidence collected by Kenneth Page Oakley, Sir Wilfrid Edward Le Gros Clark, and Joseph S. Weiner, among others, that the fossil was made up of three different species: the skull of a medieval human, the jaws of a 500-year-old Sarawak orangutan, and the teeth of a chimpanzee. The skull was stained with rust and chromic acid; microscopic examination revealed filing marks on the teeth, which led to the conclusion that chimpanzee teeth had been modified to fit human teeth, thus uncovering the truth about the Piltdown apes, which a BBC article called “the biggest hoax in British history.”

The Java man discovered in 1891 was the combination of a skull, a femur, and three teeth. Later, scientists discovered that Java man was also made up of bones from different species.

Peking Man was an “upright man” discovered in Zhoukoudian, Beijing, China, between 1920 and 1930. It was considered strong proof of the existence of the ancestor of both humans and apes. However, it was merely a patchwork of skull fragments, teeth, and so on. Many scientists suspect that the brain of the Beijing man was so small that it was not like an ape’s and more like “an ape that was hunted and eaten by humans.”

Q2. Evolution of species relies on “gene mutation”? There’s not enough time in the universe!

Based on the theory of evolution, a certain gene mutation in the original species is required for the species to evolve. While most gene mutations are harmful, the probability of a beneficial mutation is only about 1 in 1000.

Then, the mutation must not only be compatible with other genes in the original species itself, but also survive natural competition and be able to reproduce. The chance for a mutated but beneficial gene to be stable and expanding in the population is almost zero.

Let’s assume that 10 beneficial mutations (in fact, more than 10 are needed) are required for a species to evolve into a new species, and the time needed is 10 to the power of 97 years. However, we now know that the age of the universe is only 20 billion years, which is 10 to the power of 10 years, so it is almost impossible to produce a new species by genetic mutation. The universe literally doesn’t have enough time for evolution.

Q3. Nature is always the “survival of the fittest”?

Another major point of evolution is “survival of the fittest,” that the more adaptable individuals will survive. However, do all organisms in nature really follow this rule?

The journal Nature published a study of drug resistance of bacteria by scientists at Boston University and Harvard University. They found that some strains of bacteria with strong drug resistance would sacrifice themselves to increase the overall drug resistance of the bacteria, thus improving its chances to survive. In other words, nature does not exactly follow the cruel competition law of “survival of the fittest;” even microscopic bacteria display self-sacrificing altruistic behavior.

People thought that atoms were indivisible until 1897 when British physicist Sir JJ Thomson discovered that atoms could be divided. The development of science requires constant updating of the old concepts. It is only natural that the theory of evolution, which was proposed in 1859, should be questioned today.

So, if evolution is not reliable, what else do we know about the origin of species? 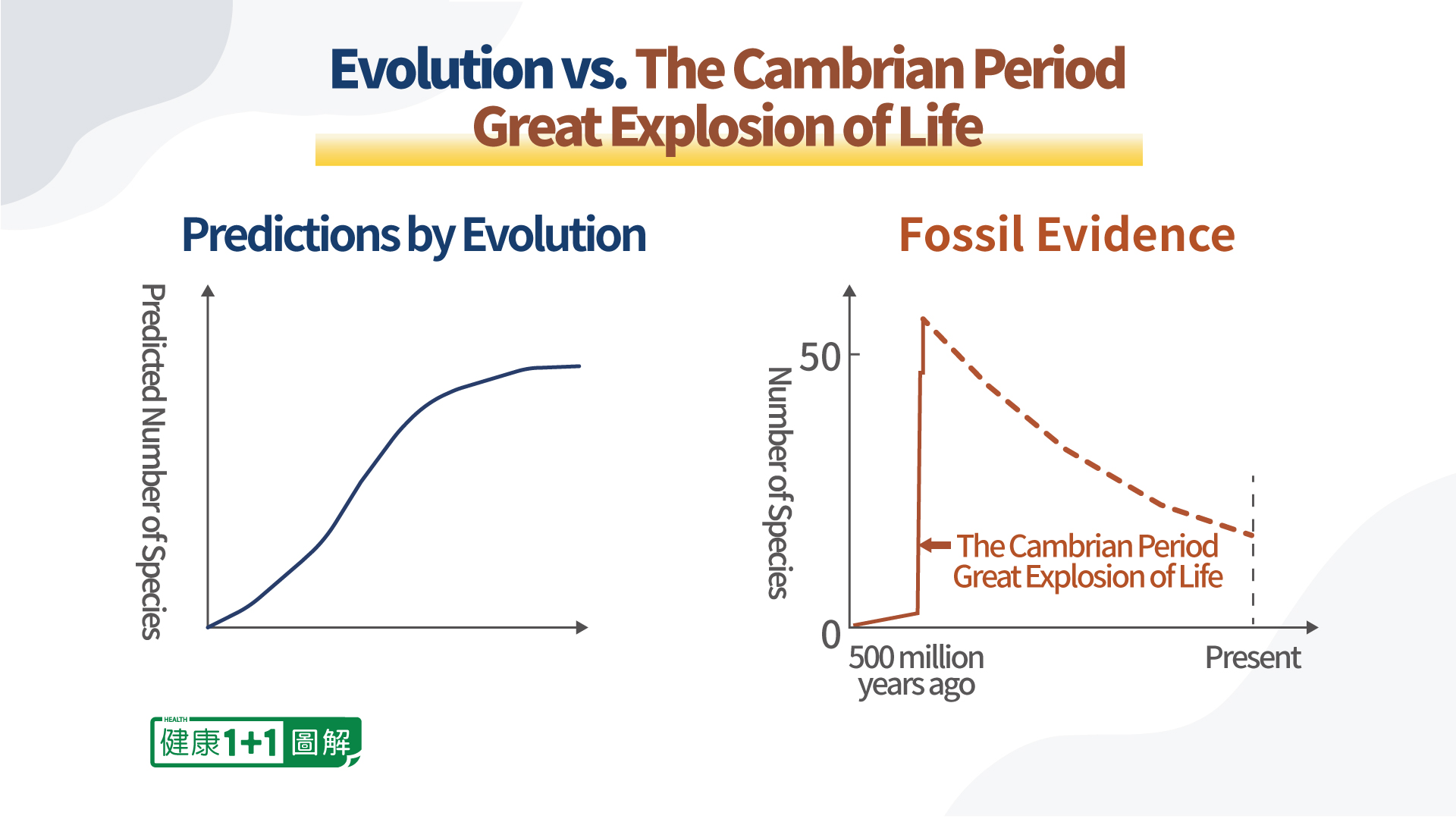 Before the Cambrian period, there was a paucity of biological diversity.

However, in 1909, Walcott found fossils of a variety of marine animals in the Burgess Shale in Canada that suddenly appeared in large numbers during the Cambrian period (about 570 to 500 million years ago).

The “fossil group of Chengjiang, China” also indicates that 530 million years ago, many different kinds of animals suddenly appeared in Chengjiang area. The Cambrian fossils found around the world belong to a total of more than 50 families and tens of thousands of species. They leave no trace of evolution or changes, hence the name the “Great Explosion of Life.”

According to the theory of evolution, life originated in the ocean, and the diversity of species is the result of evolution over a long period of time. That is to say, humans evolved from fish. However, the following study completely negated this view.

In 2018, Mark Stoeckle from Rockefeller University in New York and David Thaler from the University of Basel in Switzerland published a joint study in the journal Human Evolution. Together with hundreds of researchers worldwide, they studied 100,000 animal species and 5 million DNA fragments.

As we know, like the way each item in the supermarket has its own barcode, each species on Earth has a corresponding DNA “barcode” in the mitochondrial gene. By analyzing the “genetic barcodes” of different species on Earth and comparing the variability among them, scientists have deduced that 90 percent of the species on Earth today, including humans, appeared at the same time 100,000 to 200,000 years ago.

We expect that with the continuous development and improvement of science, human understanding of the phenomenon of life will become clearer and clearer, and these mysteries will be solved slowly.

Views expressed in this article are the opinions of the author and do not necessarily reflect the views of The Epoch Times.

This entry was posted in Education, Evolutionary Biology. Bookmark the permalink.