Given a three-day doubling rate, one would have expected the number of cases on Monday to be approaching 8,000. Instead fewer than 5,000 have so far been  confirmed.

Five days after Prime Minister Benjamin Netanyahu said an “immediate improvement” in coronavirus rates was needed to avoid a full lockdown, figures indicate that such an improvement may be unfolding, experts said Monday, with the virus appearing to be spreading more slowly.

When Netanyahu spoke last Wednesday, coronavirus cases had jumped by 121% over the previous three days. This period of rapid growth was preceded by a six-day stretch that saw a 259% rise.

By contrast, over a three-day period to Sunday evening, when the number of confirmed cases stood at 4,247, there was an increase of 58%, with a rise of a further 100 cases as of this writing on Monday. And given the virus’s long incubation period, it appears the numbers are a reflection of relatively lax measures in place 10 days ago, before many restrictions on movement or congregating were in place.

Israeli leaders and health officials have been alarmed by the prospect of the number of infected people doubling every three days, as seen in Italy. This is exactly what had been witnessed when Netanyahu addressed the nation on Wednesday, soon after the new restrictions that mostly keep citizens within 100 meters of their homes kicked in. Cases had risen from 1,071 to 2,369 since three days earlier.

Netanyahu said: “I am already telling you that if we do not see an immediate improvement in the trend, there will be no alternative but to impose a complete lockdown, except for essential needs such as food and medicines.”

He warned starkly: “If you do not mobilize to look after yourselves and your families, there will be a disaster here. I have no other way of putting it.” 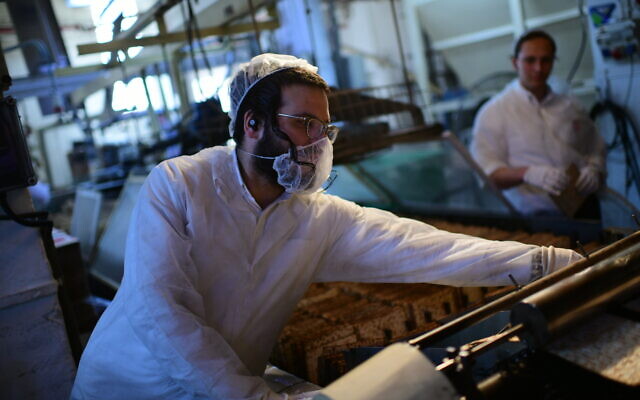 An Orthodox Jewish man wearing a face mask as a preventive measures against the coronavirus prepares matzos at the Matzot Aviv factory in Bnei Brak, March 30, 2020. (Tomer Neuberg/Flash90)

Almost five days have passed since his comments, and according to Monday morning’s figures, the number of confirmed cases still hadn’t doubled, but rather risen by 83%.

Given a three-day doubling rate, one would have expected the number of cases on Monday to be approaching 8,000. Instead fewer than 5,000 have so far been  confirmed.

“It is reason for cautious optimism,” Cyrille Cohen, head of the immunotherapy laboratory at Bar-Ilan University told The Times of Israel, commenting on the latest trend. 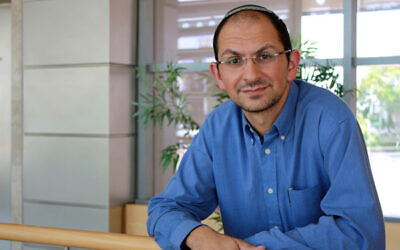 It isn’t just the number of infected people that gives room for hope, said Cohen, but also the proportion of people who are in serious condition or dead — 80 and 16, respectively. When Italy’s count of infected people was similar to Israel’s current number, more than 150 Italians had died.

Cohen said the current count of how many Israelis are infected suggests that by following restrictions and mostly staying at home, the nation is fighting the pandemic. “It’s most likely due to confinement and the measures that were taken,” he commented. “From the moment you cut off social connections, you expect to see a slowing of cases.”

The apparent slowdown has come even as Israel has ramped up testing to some 5,000 checks per day, according to official figures.

Cohen said that while he would be hesitant to discern a trend in figures for just one or two days, the five-day stretch since March 25 does seems to paint a clear picture — and one that is backed up by a high level of testing.

”This is a good sign, and I assume it’s related to the measures that have been implemented,” public health expert Manfred Green said. “If this continues, it means we’re actually being successful.” 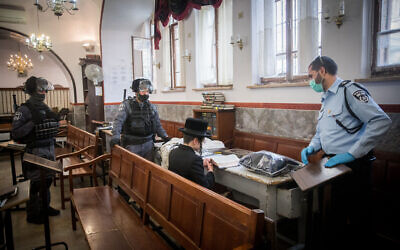 Police officers at a synagogue in the ultra-Orthodox Jewish neighborhood of Mea Shearim as they disperse public gatherings following the government’s decisions, in an effort to contain the spread of the coronavirus. March 30, 2020. (Yonatan Sindel/Flash90)

Cohen pointed out that the statistics don’t reflect the impact of restrictions introduced last week. “You have to take into account that the incubation period for coronavirus is 7 to 14 days, which means the impact of the more drastic measures won’t yet be seen,” he said.

Cohen thinks that the statistics are a vote of confidence for the measures, and early implementation has put the country in a strong position compared to the likes of Britain, but said that things could easily take a turn for the worse if the public becomes complacent. “We may have bad surprises in two weeks if people don’t respect the measures,” he said.

Set against this cautious optimism, Health Ministry Director-General Moshe Bar Siman-Tov predicted earlier Monday that Israel could yet see thousands of fatalities. “I wish you will look back on this in a few weeks and make fun of me, but I can’t see us ending this ordeal without many victims,” he said. “Unfortunately I still think the reality we will have to deal with will be thousands of dead.” 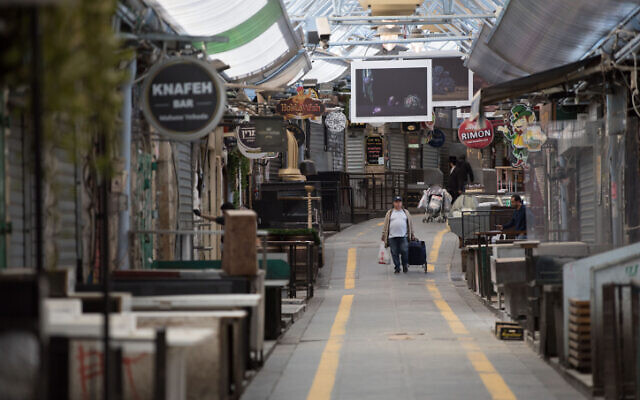 View of the empty Mahane Yehuda market in Jerusalem on March 29, 2020. (Nati Shohat/Flash90)

Green, founding director of the Israel Center for Disease Control and director of the University of Haifa’s international master’s program in public health, said that Israel should be aiming for the kind of control achieved by South Korea, which had a sharp curve in late February, but has seen an increase of just 28% over the last 20 days.

“The figures for Israel are not good and they are not bad,” Green said. “They are somewhere in the middle. Everyone looks at South Korea which seemed to be on a trajectory like Italy’s. We hopefully will get there but we are not there yet.”