US should move embassy to Jerusalem 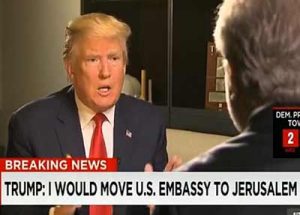 EXECUTIVE SUMMARY: Moving the US embassy from Tel Aviv to Jerusalem would be a good example of the kind of policy change that President-Elect Donald Trump has said is needed in Washington. More importantly, this action could mark a new US strategy for pursuing Israeli-Palestinian peace: Telling the truth.

The US State Department, which has always opposed moving the US embassy in Israel from Tel Aviv to Jerusalem, understands very well that any peace agreement between Israel and the Palestinians will leave at least western Jerusalem as Israel’s capital and part of sovereign Israel. So why will the State Department nevertheless advise President-Elect Donald Trump not to fulfill his promise to move the embassy?

Moving the embassy to Israel’s actual capital would provoke Arab anger at the US and lead to protests that might turn violent. The foreign policy establishment wishes to prevent this result and protect America’s status as an “honest broker.” It therefore continues to insist that because Jerusalem’s ultimate status can only be determined by agreement between Israel and the Palestinians, and that it would be wrong for the US to “prejudge” the outcome by acting on the truth that Israel’s capital is Jerusalem.

This is a perfect example of the kind of politically-correct establishment pettifogging that Trump campaigned against. Moving the embassy to Jerusalem is a low-cost action that he could take as soon as he is inaugurated, and one of the easiest and quickest changes in policy that he could implement. The new US consulate in Jerusalem was built with security features that would be needed for an embassy, so the move could be started almost immediately, without any prejudice to the Palestinian claim to eastern Jerusalem.

The State Department’s insistence on the diplomatic fiction that none of Jerusalem is part of Israel helps preserve the Palestinian hope that, someday, Israel will be forced to give up its capital and will be destroyed as the independent, democratic Jewish state.

That Palestinian hope is the main obstacle to peace. The Palestinians can only make peace when their community – and perhaps the Arab world of which it is a part – comes to understand that international pressure will never force Israel to acquiesce in its own destruction. One of the best ways the US can demonstrate that it will never consent to the Palestinian destruction of Israel is for Washington to stop ignoring blatant Palestinian lies that work against peace.

There is another way that an American truth-telling strategy could encourage peace.  Palestinian leadership now tells its people – and most of them believe – that compromise with Israel would be immoral because Israel is a colonial invader that stole Palestinian land by force. By that argument, Israel has no moral claim to any of the land, and any concession to it would be dishonorable.

But Israel is descended from Jewish kingdoms that ruled parts of the land for centuries in ancient times. It too has a traditional base for moral claims to the territory (in addition to legal claims from the League of Nations mandate). If the Palestinians recognized this truth, they would see that compromise between the two groups, each of which has valid claims to the land, could be an honorable way to end the dispute and not a cowardly yielding to force.

To undermine this moral basis for compromise with Israel, Palestinian leadership flatly denies any ancient Jewish connection to the land. They claim, for example, that there never was a Jewish temple on the Temple Mount from which Jesus could have chased the money-changers. Yet their own history belies this claim. In 1929, the Supreme Moslem Council in Jerusalem, in its guide to the Mount, wrote: “[The Temple Mount’s] identity with the site of Solomon’s Temple is beyond dispute.”

The US may not be able to induce the Palestinian Authority to stop inciting its constituents and teaching its children to hate Israel. But there are ways in which the US can expose and eventually defeat Palestinian lies that work against peace; ways that do not require getting agreement from anyone.

Exploring these new approaches would constitute a striking change in diplomatic direction. There are many examples of the West rejecting truth on behalf of the Palestinians and their Arab supporters. For example, some Western countries went along with the recent denial by UNESCO of any ancient Jewish connection to the land of Israel. The US politely ignores the Palestinian lie that there was never a Jewish temple on the Temple Mount.

If the US consistently tells the truth about the ancient Jewish presence in Palestine, and publicly refuses to swallow the Palestinians’ false and anti-peace denials of history, the Palestinian leadership will not for long be able to keep the truth from their people, or at least from the large educated class.

The US has followed a policy of avoiding truths that are painful or embarrassing to the Arabs for at least 50 years. It hasn’t worked. Maybe it is time to try the strategy of telling the truth. Moving the US embassy to Jerusalem, in accordance with the long-standing congressional position, would be a good way for President Trump to make a start on a truth-telling strategy – as well as to fulfill a campaign promise.

Dr. Max Singer, a senior research associate at the Begin-Sadat Center for Strategic Studies, is co-founder of the Washington-based Hudson Institute.