Some 500 million birds fly across the country every spring and fall, attracting thousands of birders from all over the world…However, many flocks that pass through are thinning out due to planetary warming that sends them north to breed earlier than normal, before a full complement of insect prey is available, Yoav Perlman, science director at the Israel Ornithological Center, told an English-language webinar on Sunday.

By Sue Surkes
Reprinted from Times of Israel, March 10, 2021

Habitat loss, hunting and climate change are taking a serious toll on bird populations in Israel, a leading ornithologist warned this week.

Israel forms a terrestrial bottleneck between wintering grounds in Africa and breeding grounds in Europe and Asia, making it a prime crossing point for some 200 species. Some 500 million birds fly across the country every spring and fall, attracting thousands of birders from all over the world.

However, many flocks that pass through are thinning out due to planetary warming that sends them north to breed earlier than normal, before a full complement of insect prey is available, Yoav Perlman, science director at the Israel Ornithological Center, told an English-language webinar on Sunday.

Migrating species in decline include the Cretzschmar’s bunting, which likes Mediterranean scrubland, and the rufous-tailed scrub-robin, partial to tamarisk scrub; both habitats are being developed either for construction or agriculture n Israel. Ehrenberg’s (common) redstart and the tree pipit are also in evident decline, although the reasons are unclear, Perlman said.

He added that is hard to get a regional view as most of Israel’s neighbors do not monitor birds. 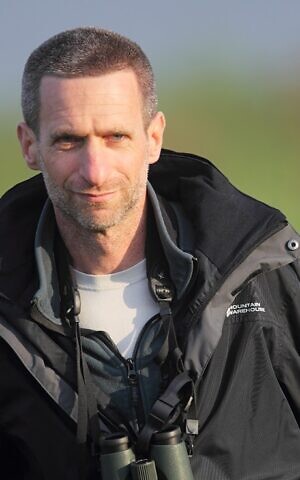 Perlman noted that several species once common in Israel have all but disappeared in the last decades, including the little ringed plover, which no longer breeds in Israel’s coastal region because there are no more wild, sandy beaches. The bimaculated lark used to breed on grassy mountains on the Golan Heights, but no longer does so.

The Golan Heights has also lost most of its Eurasian griffons, impressive vultures with a wingspan of up to 2.8 meters (9.2 feet) that roost in the rocky crevices of the Golan’s deep gorges. In 2002, there were over 80 nesting sites in the Golan and Galilee alone, but data from the Society for the Protection of Nature in Israel, which runs the Israel Ornithological Center, shows that by 2017 the number had dropped to two nests, though a handful of new nesting sites have opened in the Carmel range and breeding numbers have remained steady in the south.

“People who visited Gamla (in the Golan Heights) in the 1980s and 1990s would see tens, even hundreds of griffins flying past,” he said. “Nowadays, you can visit and not see a single one.” 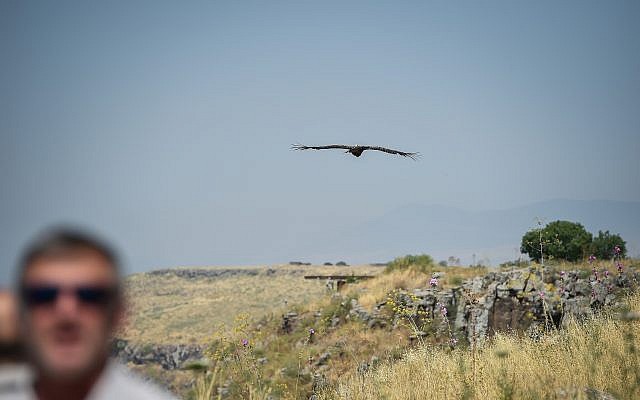 A vulture that fell ill after being poisoned is returned to the wild in Gamla, in the Golan Heights, May 16, 2019. (Basel Awidat/Flash90)

The golden eagle, another large raptor, is also critically endangered in Israel, with only 15 breeding pairs. Perlman noted that birds of prey are threatened by powerlines and poisoning by farmers.

Meanwhile, cultivation along the rift valley in southern Israel has replaced much of the acacia scrub, and with it the Arabian warbler, which is critically endangered. Only around 50 pairs are left in the country. 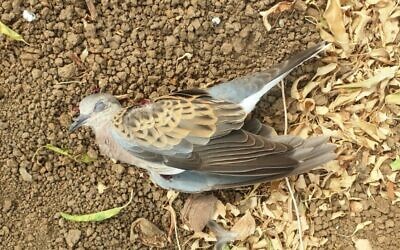 A European turtledove shot dead by a ‘sport’ hunter in the Hula Valley in northern Israel, September 2, 2020, before an Environmental Protection Ministry ban on hunting this species was imposed. (KKL-JNF Chief Birdwatcher, Yaron Cherka)

As elsewhere in the world, the iconic European turtledove is in dramatic decline and is now globally vulnerable, thanks to habitat loss and hunting. This species features in the Bible and its return to Israel from Africa has long signaled the start of spring.

Last year, Environmental Protection Minister Gila Gamliel removed the European turtledove, along with the common quail, from the list of fowl that may be hunted in Israel. The Ornithological Center and SPNI are hoping to ensure that the ban is applied again this year before hunting season begins September 1.

“We need to protect our birds because birds are excellent indicators of the health of our ecosystems, environment and climate,” Perlman told The Times of Israel. “If we protect birds and their habitats, our livelihoods and wellbeing will benefit as well. Israel is committed legally to protect its local and migratory birds — now is the time to act.” 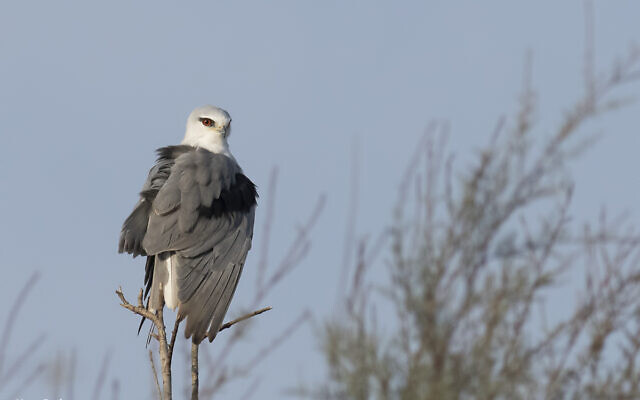 While many species are in decline, some, like buzzards and the lesser spotted eagle are remaining stable, while others are thriving.

Black-winged kites, which once just passed through Israel, now overwinter in their tens of thousands, mainly around landfill sites, where they feed on garbage and pose a danger to air transportation.

The same is true for the Eurasian crane, large numbers of which overwinter at northern Israel’s Agamon Hula lake and have become a popular tourist spectacle.

According to Perlman, both kites and cranes have benefited from climate change, partially abandoning the migration to Africa thanks to milder winters here and habitat loss there, as well as new agricultural practices here that created favorable conditions for cranes and the expansion of landfill sites that draw kites. 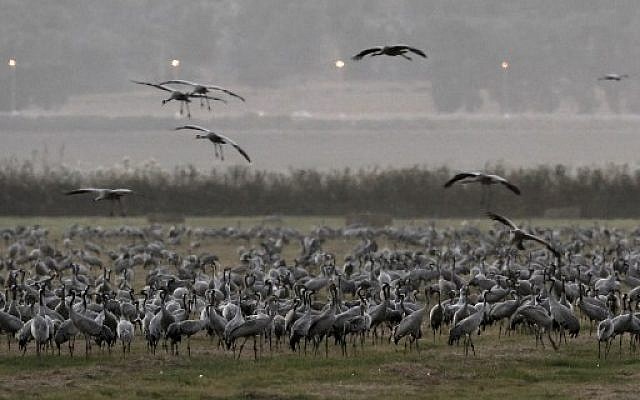 Nubian nightjars, small nocturnal birds that prefer saltmarshes, have gone from critically endangered to vulnerable and are now seen beyond their traditional breeding ground south of the Dead Sea. However, Perlman wrote last year that the expansion of the Israeli population appears to be a result of part of the Fifa nature reserve in Jordan being bulldozed.

“While there is hope that the saltmarsh of Fifa Reserve regenerates, and Nubian nightjars return to breed there in former numbers, the current conservation status in Israel and Jordan is worrying,” he wrote.

Nighttime searches have also turned up Egyptian nightjars, which breed mainly around the northern end of the Dead Sea, while several hundred pairs of the pallid scops-owl, discovered breeding in Israel in 2015 for the first time in a century, have found a comfortable niche in the mature date plantations stretching along the Jordan Valley from the Dead Sea to Beit She’an in northern Israel.

The European great tit has extended its range southwards into Israel’s deserts and even reached Eilat, taking advantage of cultivated gardens as human settlement expands, while the Namaqua dove has spread from the southern tip of Israel to the Negev desert, the Mediterranean coast and the Hula Valley in the country’s north. The striated heron and green bee-eater are also moving northwards from southern Israel, perhaps due to climate change.

Climate change appears to also be benefiting species such as the pale rockfinch and thick-billed lark, Perlman said. More frequent extreme rain events in the desert, which spark a sudden greening, are prompting bursts of breeding among these nomadic species. Once rare, the thick-billed lark has become a regular breeder in the country.

“We never had this until the last ten to 15 years,” Perlman said. 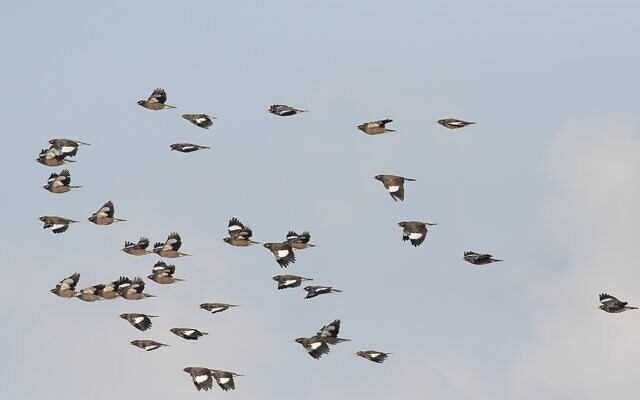 But despite the sunny spots, Perlman said overall, bird species were in trouble. To help them recover, he says it is critical to obtain more data, improve monitoring, and better protect habitats.

“Overall, the trend is not positive,” he said. “We are experiencing more and deeper declines than increases. As a result of climate change, more species are probably losing ground.”

“In some places, we need to turn the wheel back and restore wild habitats. We need to rewild them.”