He shatters myths about the Palestinian-Israeli conflict, finding his greatest Israeli allies in his quest for peace and normalcy among those living in Jewish settlements.

(February 2, 2021 / JNS) With a mask resting below his mouth, which just took in its third or fourth cigarette of the last hour, Palestinian reformer and businessman Asharf Jabari said he hasn’t received the COVID vaccine yet. And that’s not because he’s not interested in it (his chain-smoking belying interest in his own health) or because Israel hasn’t provided any supply to the Palestinian Authority, as some news outlets are wont to report.

“They [the Palestinian Authority] want it, but they’re waiting for the vaccine from Russia,” Jabari said in Hebrew, just one of the “truth-bombs” that the 47-year-old dropped along with his cigarette ash during an interview in the plush, golden-tinted reception area of his home in Area B of Hebron.

At the time, the Palestinian territories were, like Israel, under lockdown, but not as strictly. Palestinians, he said, take precautions and most wear masks, but the majority thinks that lockdowns are politically motivated. They go about their business, although inter-city travel and large gatherings are forbidden. Palestinians hospitals have not reached the breaking point, even though, to his dismay, not one new hospital has been built since the 1993 Oslo Accords were poised to improve Palestinian life, buttressed by international cash.

“The Palestinian people will get at most 30 percent of the funds,” he said. “As for the 70 percent: Where does it go?”

He’s taking matters into his own hands and currently is in talks with settler leaders to create a joint Israeli-Palestinian hospital in Hebron. Jabari, who founded a political party based on a reform platform, befriended the former U.S. Ambassador to Israel David Friedman and many settler leaders during the build-up of Trump’s Mideast peace plan—the “deal of the century”—that he wanted the P.A. to discuss rather than outright reject as a result of its typical rage. He had no problems with the Trump administration’s withdrawal of $200 million in Palestinian aid because it never went to those who really needed it. Actually, he wishes the European Union would execute a similar audit of Palestinian funding. The P.A., he said, would boycott any deal with Israel, including the Abraham Accords, that would normalize relations with Israel and help the Palestinian people at large.

“They make money from the conflict,” he said. “It’s a lot of money in their pocket. They’re not prepared to solve the problems. They’re not ready to talk about what will help the Palestinians.”

‘We want to live in peace with all Israelis’

And what helps the Palestinians is a strong economy.

Jabari led the Palestinian delegation to the Bahrain “Peace to Prosperity” economic summit in June 2019, which the P.A. also boycotted. He founded, together with Ariel community leader, Avi Zimmerman, the Judea and Samaria Chamber of Commerce to improve business relations between Arabs and Jews in the region. The employment of some 45,000 Palestinians in Israeli towns and factories in Judea and Samaria work to keep the peace, especially now, when the coronavirus pandemic could easily topple an already fragile Palestinian economy.

The media usually portrays Hebron, his hometown, as a flashpoint between settlers and Palestinians, but it’s there that bridges can be built.

“I have experience with the settlers in Hebron,” he said. “There are 600 Arab workers in Kiryat Arba. Palestinians. They have relations with Jews in Hebron already for years, for a long time. Not just form now. But when we get into politics, problems will arise. The problem is when settlers say: ‘We are here, and we live here.” And the Palestinians say: ‘We are here and live here.’

“No one from either side will leave. So we have to live together. Who could tell the settlers to leave Hebron? Only the Israeli government. Which prime minister is ready to tell them that? We have two options: We live in coexistence and cooperation between us or in perpetual war. What do we prefer?”

He doesn’t differentiate between Israelis who live in Judea and Samaria (“settlers”) and the rest of Israel.

“We want to live in peace with all Israelis. What’s the difference between someone, a Jew who lives in Hebron and someone who lives in Tel Aviv? That’s a Jew, and that’s a Jew. Right or not?” he said, ending his point with one of his favored rhetorical flourishes. 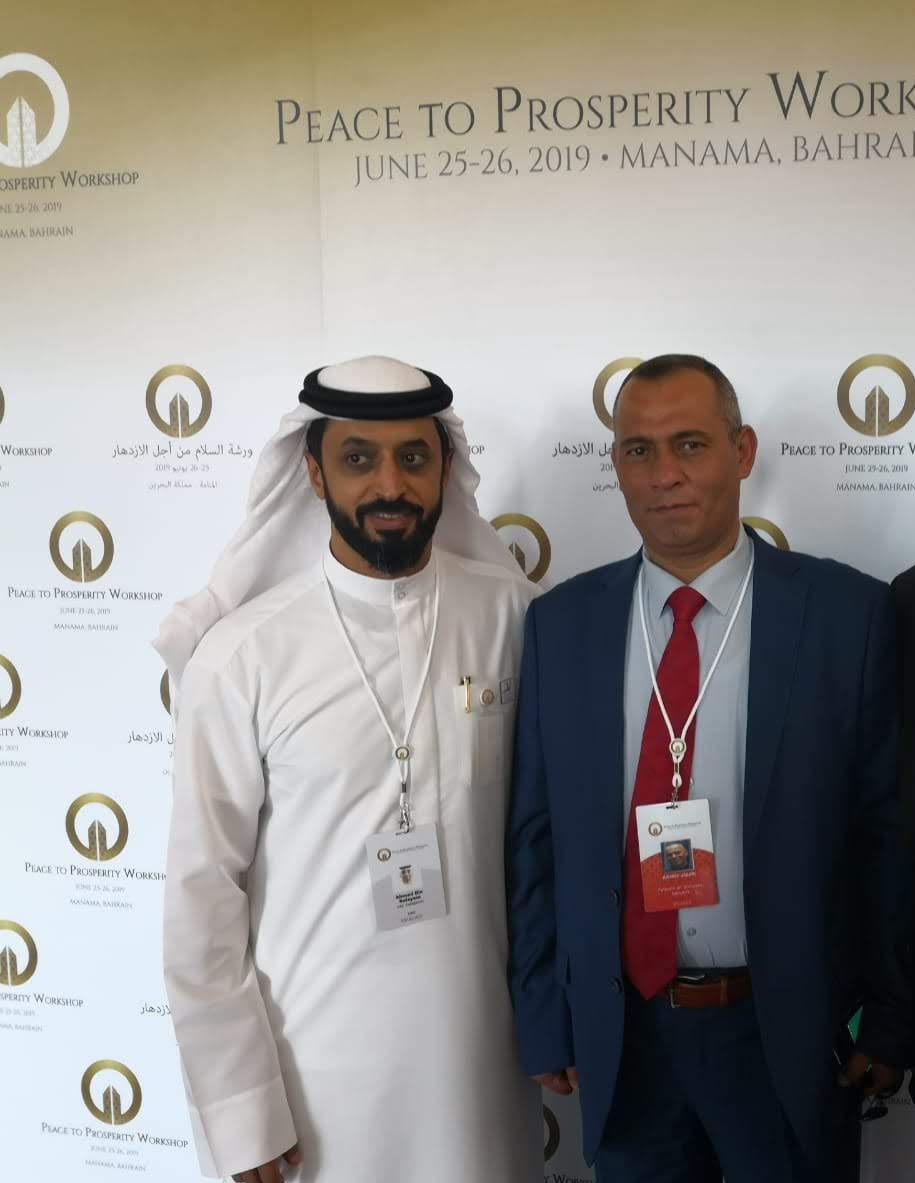 Ashraf Jabari at the “Peace to Prosperity” economic summit in Bahrain in June 2019. Credit: Courtesy.

‘They don’t have backing’

Despite his “truth-bombs,” as an independent ambassador, he is careful not to take sides in American politics, focusing instead on the issues. Asked whether he was concerned that the Biden administration would return to the Oslo Accords paradigm, he said, “There’s no going back to what was. Why not? There’s a new situation on the ground in our region. It’s not like what it was before 27 years.”

In 1993, about 200,000 Jews lived in Judea and Samaria; since then, entire new communities have sprung up in the disputed areas, quadrupling the Jewish population. The “two-state solution” is the pipe dream of international elites.

“A big part of the world says we prefer that there will be two-states; it doesn’t matter if it’s 1967 or not-1967 borders—that’s not the point,” he acknowledged. “The point is a Palestinian state. But are there Palestinians who’ll agree to a state without East Jerusalem? No! So the whole world, for 50 years, says that the Palestinians deserve and will get a Palestinian state on 1967 borders with East Jerusalem as capital. And what’s the result? Conflict. Right or not? I’m speaking from what we experience, not talking out of my head.”

He’s surprised that Western leaders would support Palestinian Authority leader Mahmoud Abbas and his political party, Fatah, which is equipped with a military arm. He’s checking the possibility to run for the upcoming May 22 Palestinian elections, the first in 15 years.

Most Palestinians, he said, agree with him but are afraid to speak out.

“They don’t have backing,” he said.

As for the low-tech “third intifada” that terrorized Israelis with knife-stabbings and car-rammings over the last five years, its perpetrators, he said, are “lone wolves” not necessarily frustrated by Israel but by the poor conditions caused by P.A. governance.

“Ask them what they prefer to live under—Israeli rule or P.A. rule—and you’ll get your answer. Go around ask them.”

Unfortunately, that’s not easy, and not because of coronavirus lockdowns. Israelis are forbidden by Israel from entering Palestinian areas, an absurd side effect, he said, of the “peace process.”

“Let’s live in peace or live in conflict for the next 50 years, but there is no other option,” he stated plainly. “No Palestinian will agree on what the Israelis say, and Israelis won’t agree on what the Palestinian say. So what should we do? Where do we go? We went to the whole world, and we got nothing. Right or not? Give me someone who said you got something good. We got nothing.”