The flirtation between Israel and Saudi Arabia, which has been gaining momentum both publicly and privately in recent years, seems to be picking up even more steam now, especially on the Israeli side. Israel’s Military Chief of Staff General Gadi Eizenkot gave a wide-ranging interview to a major Saudi website offering greater intelligence cooperation, among other overtures. Israel is co-sponsoring a draft Saudi UN resolution on Syria. And Israel’s communications minister praised comments by the Saudi Grand Mufti that were highly critical of Hamas, and invited him to visit Israel. Reciprocal Saudi moves have been more subtle and often unofficial, yet signs of an increasing recognition of the potential value of working more closely with Israel to counter Iran are readily discernible in Gulf Arab discourse.

Most attention on this issue has focused on Iran, because countering Tehran’s growing regional power—particularly as the war in Syria winds down, and with Iran and its allies gaining control of key strategic areas along the Syrian-Iraqi border—is uppermost in the minds of Saudis and Israelis alike. Both also feel keenly menaced by Iran’s most effective Arab proxy, Hezbollah, which has emerged from the Syrian war much more powerful than before, and has engaged in conflicts around the region. But, especially if something more significant develops from these overtures, what might all this mean for the Palestinians?

The instinctive Palestinian, and arguably more broadly Arab, reaction would be negative. The traditional assumption has been that the Palestinian cause benefits from a zero-sum attitude toward Israel by the Arab states that, at a minimum, demands a complete end to the occupation that began in 1967, before significant diplomatic progress with Arab states can be purposefully initiated. There’s still a strong sense of betrayal about Egypt’s separate peace with Israel in 1979; there’s somewhat more understanding about why Jordan undertook a similar treaty with Israel following the Israeli-Palestinian Oslo Accords.Many Palestinians and their supporters are likely to instantly conclude that any meaningful efforts at building a new strategic relationship between Israel and Gulf countries like Saudi Arabia will be at their expense. This is certainly understandable, but it’s by no means necessarily correct. In fact, there is every reason for Palestinians to see far more opportunity than danger in these potential developments.

A new opening between Saudi Arabia and Israel wouldn’t deprive Palestinians of anything they currently possess that has either real or potential value. It certainly wouldn’t make the occupation worse or do anything that’s likely to prolong it. To the contrary, given the political constraints the Gulf Arab countries face domestically and regionally—as well as their genuinely held (if sometimes, though unfairly, doubted by both Palestinians and Westerners) sympathy with the Palestinian cause—there are major limitations to how far Saudi Arabia and others could or would publicly go in developing closer ties to Israel.

The Arab Peace Initiative, launched by Riyadh in 2002 and subsequently endorsed by both the Arab League and the Organization of Islamic Cooperation, initially held out full diplomatic and trade normalization for Israel with virtually the entire Arab and Muslim worlds as a major additional benefit to be acquired upon the conclusion of a peace agreement with the Palestinians. The Arab, and especially Saudi, position appears to have evolved lately to accept the virtue of “concurrence,” whereby limited Israeli peace moves and concessions toward the Palestinians, such as restricting settlements in the occupied territories, would be matched by concomitant limited Gulf Arab gestures toward Israel, such as civil aviation cooperation or even some limited official meetings. The idea is that a virtuous circle could be created in which new paths to an eventual peace between Israel and the Palestinians, and then the full normalization with the Arab and Muslim worlds for Israel, can be accomplished.Naturally this isn’t what Palestinians would ideally want, either as a process or, possibly, as an outcome. However, it may be the best they can hope for under the circumstances, and certainly seems to be the only game in town. Palestinians would be wise to remember how isolated and forlorn they were during most of the second Obama administration, with their issue essentially consigned to John Kerry’s wish list and nothing more. They virtually disappeared from the international, and even the Arab, stage, and became an afterthought even though their cause continued to be exploited by a wide range of terrorist groups. But the potential for a new strategic relationship between Israel and Gulf Arab countries was one of the main reasons why the incoming Trump administration, to the astonishment of many, resurrected the Israeli-Palestinian issue and made it a central feature of the White House’s agenda. Palestinians, particularly those associated with the Palestinian Authority and Palestine Liberation Organization, were utterly delighted to have been resurrected politically and diplomatically by this unexpected development. 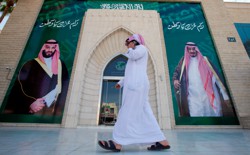 Now the Trump team says that, after studying the issue for 10 months, it is on the brink of coming up with its new plan for Israeli-Palestinian peace, which seems to be some version of the traditional two-state solution but almost certainly involves the “outside-in” approach of seeking momentum between the two parties by introducing a new Saudi and Gulf Arab role in outreach to Israel. Almost lost in the swirl of drama surrounding the mass arrest of prominent citizens in Saudi Arabia, the Houthi missile fired at Riyadh International Airport from Yemen, and the resignation of Lebanese Prime Minister Saad Hariri, was the telling fact that Palestinian President Mahmoud Abbas was summoned to Riyadh for a meeting with Crown Prince Mohammed bin Salman in the midst of all that chaos. The meeting may have focused on the next steps in squeezing Hamas to give up more of its control over Gaza. But there was also speculation, particularly in the Israeli media, that the Palestinian leader was being told to prepare to cooperate with a forthcoming American peace effort if he values Saudi friendship.

No doubt this all feels somewhat coercive to Palestinians, who, like the Lebanese, are often at the mercy of more powerful players. However, there isn’t any other obvious path forward for Palestinians. Though they may have to adjust their expectations, they definitely stand to be net beneficiaries of a greater openness between Israel and Arab countries that, politically, would have to insist on movement on Palestinian issues in order to develop a new strategic relationship with the Jewish state. At least to some extent and at times, others might be negotiating on Palestinians’ behalf, which is plainly sub-optimal. But there doesn’t seem to be any other way of generating momentum on Palestinian concerns, and without this component, it’s likely that the Trump administration will, like its immediate predecessor, quickly become fed up and walk away, leaving Israel relatively secure and prosperous and the Palestinians in a profoundly unenviable position.

It’s unlikely that many Palestinians share the degree of alarm that Israelis and Saudis feel about the growth of Iranian power in the Middle East, and particularly the emergence of an Iranian-controlled “land bridge” between Tehran and Lebanon and its Mediterranean coast. Yet this is a strategic game changer that, if consolidated, would greatly strengthen the regional clout of the most cynical exploiter of their issue in recent decades: Iran. Palestinians would be well advised to view the potential dialogue between Israel and Arab countries like Saudi Arabia as an opportunity to prevent their issues from being once again egregiously exploited or discarded.In the longer term, a wider opening between Israel and the Gulf Ar

ab countries that are now largely driving the broader Arab agenda, especially when they collaborate with Egypt and Jordan, is currently the only viable path toward the resurrection of a process that can bring about, eventually, an end to the occupation and the realization of Palestinian independence. In the meanwhile, if it flourishes, such a new regional reality is bound to involve some benefits to Palestinians, and to keep their cause central to the strategic thinking of Washington and its key Middle Eastern allies. Therefore, it would be wise for Palestinians to look for ways of maximizing how this dynamic can work for them rather than indulging in knee-jerk denunciations and recriminations that will gain them nothing.