Israelis, Palestinians and the ‘Two-State Situation’ 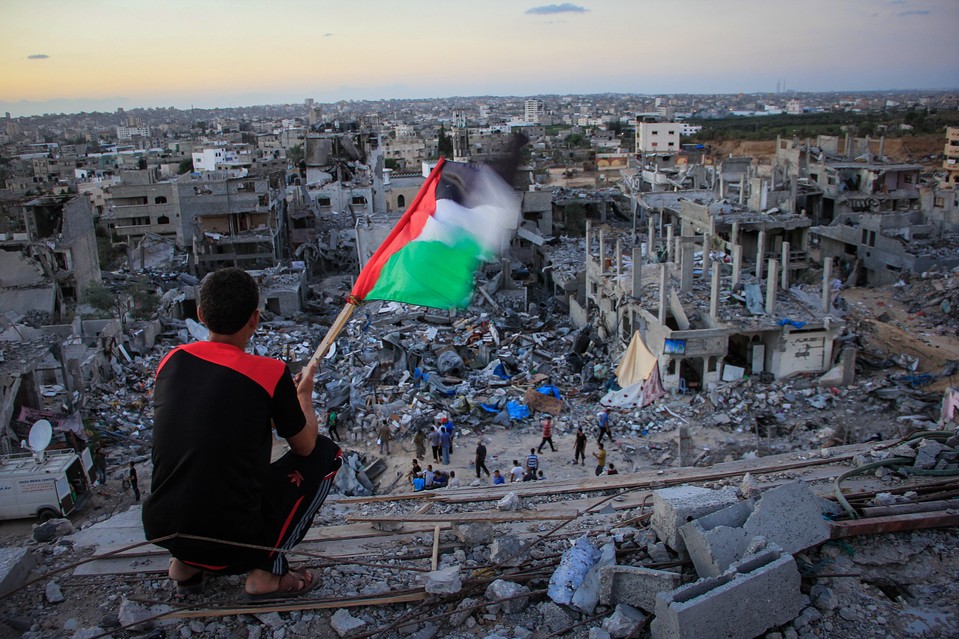 A Palestinian youth holds a flag as he sits above the ruins of his home and others in Gaza City that were destroyed during the most recent war with Israel in September 2014. Photo: Pacific Press/ZUMA24.com

Israeli and Palestinian leaders sit at a table and sign a treaty that ends a century of conflict. Israel pledges to withdraw from most of the West Bank, to uproot dozens of settlements and to redivide Jerusalem. The Palestinians forfeit their demands for regaining Haifa and Jaffa and relocating millions of Palestinians to Israel. The right of the Jewish people to sovereignty in its homeland is recognized. Thereafter, Israel and Palestine will live side-by-side in prosperity, stability and peace.

That is what policy makers have sought for more than 20 years, without success. The reasons are simple. A final-status agreement would require Israelis to cede land that is vital to their security and which many regard as sacred; to evict 100,000 citizens from their homes; and to give up half of the country’s capital. A final-status agreement would also mean creating a Palestinian state ruled by a corrupt, unelected regime that, in the current regional chaos, is likely to fall to radicals.

Such sacrifices and risks could be justified only if the Palestinians were genuinely willing to end the conflict. They would have to renounce all further claims to Israeli territory and a “right of return,” and to recognize a legitimate Jewish state on their border. But no Palestinian leader has ever agreed to those terms.

By insisting on concessions that neither side can reasonably make, the peace process has not only failed but brought us further from peace.

Though the world speaks loosely of Israel’s “occupation” of the West Bank, in fact, more than 90% of the Palestinian population enjoys de facto sovereignty. Israeli soldiers don’t patrol the major Palestinian cities of Ramallah, Nablus, Jenin, Jericho and Bethlehem, and are largely absent from other towns. Moreover, these areas cooperate extensively with Israel in such crucial fields as water supply, energy and security. Virtually all Palestinian agricultural exports are shipped abroad from Haifa, an Israeli port city. There is a brisk foreign-tourist trade that transcends the undeclared borders between Israelis and Palestinians.

This two-state situation can be reinforced. In addition to the joint programs in water purification, Israel could greatly increase water exports to the Palestinians and generate tens of thousands of agricultural jobs. Tunnels and overpasses can be built to further facilitate free movement. Foreign governments and nongovernmental organizations could upgrade their efforts to create democratic institutions within the de facto Palestinian state. Much could be done to broaden current private-sector projects in manufacturing and high-tech on the West Bank. Overseas investment could be encouraged and channeled in ways that fortify the two-state situation.

Recall that during last summer’s war in Gaza, Hamas repeatedly tried to ignite a third Intifada in the West Bank, but the Palestinians there felt they had too much to lose. Israel has a paramount interest in ensuring that the Palestinians will have even more to lose.

To be sure, free movement for Palestinians cannot be allowed to provide free access for terrorists, and investment in West Bank industries cannot fund the production of rockets. Israel must maintain its defense and intelligence capabilities, including control of airspace and the right of hot pursuit.

But the two-state situation would require Israel to make its case to the world. Accordingly, Israel should restrict its building to the major West Bank settlement blocs in Judea and Samaria and to the Jewish neighborhoods of Jerusalem. Commensurate with its security, Israel should minimize its interference in the lives of the more than 2.5 million Palestinians on the West Bank. And if a Palestinian leader emerges who is willing to sign a comprehensive peace, Israel will be there at the table.

Next month, Israelis will go to the polls to elect a new government. As a candidate in the centrist Kulanu Party, I have heard how the left-leaning Zionist Camp is still waiting for peace talks with Palestinian Authority President Mahmoud Abbas —who is busy unilaterally declaring a Palestinian State in the United Nations without giving us peace and threatening to sue us for war crimes. Even while those initiatives are being pursued, jeopardizing Israel’s international standing, the current government preserves the status quo. Naftali Bennett ’s right-wing Jewish Home Party, meanwhile, promises to annex 60% of Judea and Samaria. This would severely strain relations with Israel’s closest allies, including the U.S., and endanger Israel’s Jewish and democratic character.

Israel has no option but to cease outsourcing its decisions to the Palestinians and to take responsibility for its own fate. The only answer—so I tell Israeli voters—is the two-state situation.

Mr. Oren, a former Israeli ambassador to the U.S., is a member of Israel’s Kulanu Party and a candidate for the Knesset.