As the region continues to unravel, it’s becoming increasingly clear that there is no distinction between al-Qaeda attacks in Europe or PLO/Hamas attacks against Israel.

For anyone familiar with Tom Friedman‘s worldview, his recent article, “Say It Like It Is” was rather eye-opening. On the prestigious pages of the New York Times, Friedman voiced criticism of the Obama administration for its unwillingness to state the obvious connection between the increasing acts of terror throughout the world and Islam.

In reference to some rather astonishing quotes on the subject by White House Press Secretary Josh Earnest, Friedman had this to say: “President Obama knows better. I am all for restraint on the issue, and would never hold every Muslim accountable for the acts of a few. But it is not good for us or the Muslim world to pretend that this spreading jihadist violence isn’t coming out of their faith community.”

Similarly, he assails the administration for what he believes to be an excessive fear of being considered anti-Islamic. On this issue he writes, “When you don’t call things by their real name, you always get in trouble. And this administration, so fearful of being accused of Islamophobia, is refusing to make any link to radical Islam from the recent explosions of violence against civilians (most of them Muslims) by Boko Haram in Nigeria, by the Taliban in Pakistan, by al-Qaeda in Paris and by jihadists in Yemen and Iraq. We’ve entered the theater of the absurd.”

Although he didn’t state his reason for omitting Israel from the list, it’s safe to assume that he, like many others, makes a distinction between the violent jihadist threat that is engulfing parts of Europe, Africa and Asia and the one hundred years of Arab terror directed against Israel. According to this division, the former is frequently explained as being fueled by a struggle in certain parts of the Islamic world in coming to grips with or totally rejecting modernity while the latter is usually attributed to the frustration of the Arabs west of the Jordan River to throw off the shackles of “the occupation” in order to successfully fulfill their goal of achieving statehood. 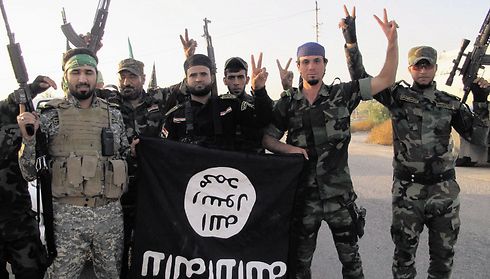 Islamic State fighters. ‘In many ways, Arab/Islamic organizations and dictatorships are all united in the broader religious/cultural/civilizational clash against the West, as well as in their refusal to grant any legitimacy to Israel’s very existence’ (Photo: EPA)

But is this a valid distinction? Is there really a difference between Jews being murdered while praying in a synagogue in Jerusalem’s Har Nof neighborhood to French journalists being gunned down at their place of employment in Paris? Or is the butchering of a Jewish family in Itamar any less revolting than the sick acts of terror currently being committed by Boko Haram in Nigeria? Is there no common denominator in all of this?

Likewise, does anyone really believe that the reason the Sunni al-Qaeda or the Iranian backed Shiite Hezbollah haven’t perpetrated a September 11 type of mega-attack in Tel Aviv or Jerusalem is because they consider the dispute here to be a local territorial issue unrelated to their broader jihadist struggle? Has the world really become that naïve or cynical?

Moreover, regarding the theory which posits that the endless acts of terror committed against Israel are merely forms of resistance to the Israeli “occupation” of Judea and Samaria, how does this reconcile with the fact that the organization which was created to liberate Palestine, the PLO, was founded in 1964, a full three years before the 1967 war and the beginning of the supposed occupation?

A similar question can be raised regarding the motivating factor behind the numerous acts of terror directed against Israel throughout the years, whether in the early days of the state or in recent years. Are we truly to believe, as some would suggest, that all of these acts of terror are nothing more than the collective resistance of the local Arabs to the Israeli occupation and/or settlement of certain areas of land?

The truth is that the so-called resistance, regardless of when or by whom, is really a cover for the Arab refusal to accept the very existence of the State of Israel in any shape or size. Therefore, from Israel’s perspective there is no quantitative difference between a secular nationalist movement led by Arafat or by his friend and successor Abbas and a fundamentalist religious organization such as Hamas or Islamic Jihad since at the end of the day they all long for Israel’s destruction.

Still further, although in terms of religious beliefs or in terms of preferred tactics for confrontation there might exist substantial differences amongst organizations such as the PLO, Hamas, Hezbollah, al-Qaeda, Boko Haram and ISIS as well as amongst Arab/Islamic dictatorships such as Iran or Syria, in many ways they are all united in the broader religious/cultural/civilizational clash against the West as well as in their refusal to grant any legitimacy to Israel’s very existence.

Despite the obvious, many are still unable or unwilling to connect the dots and instead they cling to the belief that there is a clear dichotomy between a global jihadist terror threat and a local territorial dispute.

Nevertheless, events are quickly happening which require an updated paradigm. In other words, just as the breakup of the former Soviet Union and the end of the Cold War created the need for a paradigm shift since the previous way of viewing the world as being divided between two main competing superpowers no longer depicted an accurate picture of reality and as a result was no longer useful for political scientists trying to predict future trends or for diplomats working to resolve regional conflicts, so too here.

The Middle East that was has been turned upside down by the Arab Spring. Sovereign Arab states are falling apart as inter-Muslim fighting rages out of control. Christians of the region are being persecuted with many choosing to flee. And the Islamic wave of terror, which is already wreaking havoc in parts of Africa, Asia and Europe, is steadily approaching Israel.

Considering both the deeply entrenched reluctance on the part of the Arab world to accept a sovereign Jewish state in its midst as well as the rapidly deteriorating security situation throughout the Middle East, a reassessment of the regional and local situation vis-à-vis the Arabs is needed in order to produce a new paradigm that will 1) free Israel from blindly continuing along on the present suicidal Oslo path of relinquishing land in the vain hope of achieving peace and 2) enable Israel to start charting a new course of direction that will be far more suitable for its long-term survival.

Finally, the suggested paradigm shift is predicated on two main points, both of which must be clarified and internalized. Briefly stated, they are:

Until these points are internalized by the Israeli leadership, any significant change of direction will be nearly impossible.

Yoel Meltzer is a freelance writer living in Jerusalem. He can be contacted via http://yoelmeltzer.com .