World is obsessed with hating Jews 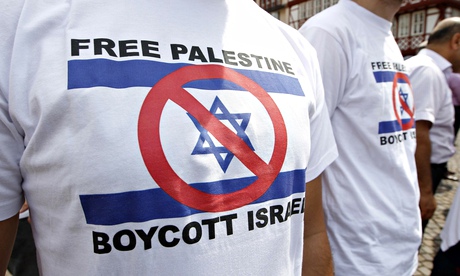 A protest against the Israeli offensive in Frankfurt. ‘In Germany, chants of ‘Hamas, Hamas, Jews to the gas!’ have been heard.’ Photograph: Ralph Orlowski/Reuters

It is no longer possible to deny that Europe still has a “Jewish problem”. In France, synagogues have been firebombed. In Germany, chants of “Hamas, Hamas, Jews to the gas!” have been heard. The British Jewish community, too, is reporting a spike in antisemitic incidents – most thankfully non-violent – in a nasty spillover of anger over Gaza. “Free Gaza” was spray-painted onto a Brighton synagogue; a “child murderers” sign affixed to a synagogue in Surrey. This nastiness permeates polite society too: in sympathising with David Ward MP’s pro-Hamas comments, former Lib Dem MEP Edward McMillan-Scott derided the Board of Deputies of British Jews as “a frightful bag of disputatious Jews”.

Perhaps no wonder that Newsweek’s cover story last week had the chilling headline: “Exodus: why Europe’s Jews are fleeing once again”.

Critics of Israeli policy might say that only Zionists, not all Jews, should be facing reproach for the operation in Gaza. But the anti-Jewish backlash – aimed at Jewish, not specifically Zionist, targets – has, ironically, reminded many Jews precisely why they need a safe and secure Jewish homeland in the first place – the essence of Zionism.

Why has the conflict in Gaza caused such a frightening reaction on the streets of Europe? One answer is that the media attention has been excessive, exaggerated beyond all reasonable proportions, and it is this which encourages outbursts of anger by appealing to the public’s emotions. Tiny Israel ranks fifth in the list of foreign countries most reported on by the Guardian. Gaza is an important news story – but the wall-to-wall coverage leaves many scratching their heads. Nobody seems to recall similar attention devoted to the far greater civilian casualties of the UK’s operations in Iraq and Afghanistan.

Why the disproportionate coverage of Israel? “Jews are news” many say, with a shrug. But this obsession with Israel’s conduct tacitly encourages the easy slide into hostility towards Jews.

First, the reporting gives the false impression that the situation in Gaza, though tragic, is uniquely horrific. Compare it to the silence surrounding Isis’s frightening rampage through Iraq: Mosul has been emptied of its ancient Christian community; hundreds of thousands of Yezidis have been cleansed from Nineveh province. Compare it also to coverage of the plight of Palestinians in Syria, where thousands of Palestinians have been killed and the Yarmouk refugee camp remains under siege. How many newspaper front pages have been devoted to these events?

The problem is not helped by hyperbole: one report on Sky News even compared the Gaza operation to the nuclear attacks on Hiroshima and Nagasaki. Moreover, the flood of heartbreaking images of dead children addles the brain: Israel’s protestations that it does more than any other army to avoid civilian casualties are simply laughed off. Israel is painted as irredeemably evil; its friends, accomplices in crime. I cannot count the number of times I have been told that if I am a Zionist – which means no more than believing that Israel has a right to exist – that means I must support the murder of children.

Second, much of the media have failed to seriously engage with Israel’s moral and strategic dilemmas, assuming instead that Israel deliberately seeks civilian casualties. Perhaps it is taken for granted that liberal democratic Israel should be held to higher standards than an internationally recognised terrorist group. But the incessant opprobrium can easily give the impression that Israel alone is at fault – as if Hamas were not indiscriminately firing missiles at Israeli civilians, and digging tunnels to abduct or massacre them. This induces people to see the conflict in black and white: Palestinians, good; Israelis, bad. Hence the curious paradox whereby Israel’s detractors no longer expect better of Israel – they think it kills children for sport – but still assign it a disproportionate share of the blame, giving Hamas a free pass. The anti-Jewish backlash follows, as Jews are perceived as supporting action that is patently and unquestionably wrong.

Sometimes the hyperbole gets close to incitement. When people accuse Israel of “genocide”, invoking the Holocaust or likening Gaza to a “concentration camp” or wielding placards that equate the Star of David – a Jewish symbol as well as an Israeli one – with the swastika, they reveal a deep ignorance of both the past and present. As Dave Rich of the Community Security Trust has argued: “It’s a totally false comparison that plays on Jewish sensibilities in order to provoke a reaction. Another word for that is Jew-baiting.”

It is no less disturbing to find the casual use of classically antisemitic tropes for example accusations that the Jews control the media or governments or that they thirst for gentile blood. The Everyday Antisemitism Project, which I established two weeks into the current round of conflict to expose this phenomenon, overflows with examples of anti-Israel rage expressed through traditional anti-Jewish stereotypes and tropes.

Sometimes these tropes are applied euphemistically to “Zionists”, but the euphemism isn’t fooling anyone. To Jews, aware that these have been the staple motifs of Jew-hatred over many years, they press too many buttons.

Of course Israel deserves criticism: it would not be such a vibrant democracy without it. But those rightly concerned by civilian deaths should be careful not to allow emotion to override their reason, to treat the conflict in simplistic terms, or to slip into language and images associated with classical antisemitism. The lessons of history are all too plain when the perceived iniquities of a certain population develop an obsessive grip on the public imagination.