No pity for Palestinian Arabs

Pity the Palestinians? Count Me Out

Thousands of Arabs are dying in Syria and South Sudan. Where’s the outrage on behalf of those truly suffering?

Provoked by the predictable collapse of the farcical negotiations forced by Secretary of State John Kerry on the Palestinians and the Israelis, I wish to make a confession: I have no sympathy—none—for the Palestinians. Furthermore, I do not believe they deserve any.

This, of course, puts me at daggers drawn with the enlightened opinion that goes forth from the familiar triumvirate of the universities, the mainstream media and the entertainment industry. For everyone in that world is so busy weeping over the allegedly incomparable sufferings of the Palestinians that hardly a tear is left for the tribulations of other peoples. And so all-consuming is the universal rage over the supposedly monumental injustice that has been done to the Palestinians that virtually no indignation is available for any other claimant to unwarranted mistreatment. 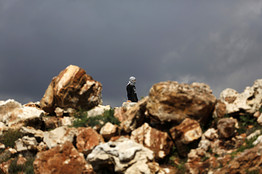 A Palestinian protester stands during clashes with Israeli troops in the West Bank village of Nabi Saleh in March. Reuters

Well, to judge by the most significant measure and applying it only to two instances of what is going on at this very moment: In Syria, untold thousands of fellow Arabs are starving, while according to the United Nations official on the scene in South Sudan, 3.7 million people, amounting to one-third of the population, are now facing imminent death by starvation.

And the Palestinians? True, when they wish to go from the West Bank into Israel proper, they are forced to stop at checkpoints and subjected to searches for suicide vests or other weapons in the terrorist arsenal. Once, when she was secretary of state, Condoleezza Rice bemoaned the great inconvenience and humiliation inflicted by such things on the poor Palestinians. Yet she had nothing to say about Palestinians dying of starvation on the West Bank, for the simple reason that there were none to be found.

Nor did anyone starve to death in Gaza when it too was under Israeli occupation. And despite propaganda to the contrary, neither is anyone facing the same fate in Gaza today because of the blockade the Israelis have set up to prevent clandestine shipments of arms intended for use against them.

Speaking of Gaza, it can serve as a case study of the extent to which the plight of the Palestinians has been self-inflicted. Thus when every last Israeli was pulled out of Gaza in 2005, some well-wishers expected that the Palestinians, now in complete control, would dedicate themselves to turning it into a free and prosperous country. Instead, they turned it into a haven for terrorism and a base for firing rockets into Israel.

Meanwhile little or nothing of the billions in aid being poured into Gaza—some of it from wealthy American Jewish donors—went to improving the living conditions of the general populace. Which did not prevent a majority of those ordinary Palestinians from supporting Hamas, under whose leadership this order of priorities was more faithfully followed than it was under Fatah, its slightly less militant rival.

As for the monumental injustice supposedly done to the Palestinians, it consists largely of losing territory in the war they themselves provoked in 1967, and the refusal of their demand that every inch of it be returned to them by the Israeli victors in that war. Such demands have always been known and universally denounced as revanchism or irredentism, most recently over the Russian seizure of Crimea. But where Israel is concerned, everything goes topsy-turvy, so that Palestinian irredentism is universally supported.

The accompanying and equally great injustice allegedly suffered by the Palestinians is that they have been denied a state of their own. But this hardly qualifies as unique, given that dozens of other ethnic groups—the Kurds being the most prominent—are in the same boat.

In any event, this "injustice" is also self-inflicted, since three times in the past 15 years the Palestinians have refused offers of a state on most of the territory taken by Israel in 1967 and with Jerusalem as its capital. They have justified these refusals by one pretext or another, but as anyone willing to look can see, what they truly want is not a state of their own living side by side with Israel but a state that replaces Israel altogether.

With this we come to the main reason I believe that the Palestinians do not deserve any sympathy, let alone the astonishing degree of it they do receive (and not least from many of my fellow Jews). It is that ever since the day of Israel’s birth in 1948, they have never ceased declaring that their goal is to wipe it off the map. In all other contexts, this would be called by its rightful name of genocide and condemned by all decent people. Yet—here we go topsy-turvy again—for any and every step Israel takes to defend itself against so shamelessly evil an intent, it is the Israelis who are obsessively condemned at the U.N. and by the increasingly strident propagators of what calls itself "anti-Zionism" but is also increasingly indistinguishable from anti-Semitism.

Nor, alas, is it only the leaders of the Palestinians who harbor this evil intent. As revealed by poll after poll, as well as by the elections that led the way for Hamas to take power in Gaza, a decisive majority of the Palestinian people does so as well. No doubt this is the fruit of relentless indoctrination from above, but the damage has been done, and the end result is what it is.

Indeed, the best that can be said of both Palestinian leaders and led is that many of them no longer imagine—as did Gamal Abdel Nasser, the former president of Egypt—that they have the power to drive the Jews of Israel into the sea. Therefore they are now willing to give up pursuing the goal of genocide and to settle for the more modest objective of politicide—that is, to get rid of the Jewish state by transforming it, through various "peaceful" means like the "right of return," into a state with a Palestinian majority.

I for one pray that a day will come when the Palestinians finally let go of the evil intent toward Israel that keeps me from having any sympathy for them, and that they will make their own inner peace with the existence of a Jewish state in their immediate neighborhood. But until that day arrives, the "peace process" will go on being as futile as it has been so many times before and as it has just proved once again to be. Another thing that never changes: When John Kerry testified on Capitol Hill on Tuesday, it was the Israelis he blamed for this latest diplomatic fiasco.