Middle East correspondents are overworked and under intense pressure.

If correspondents insist on using biased and hackneyed phrases, they should at least provide supportive evidence from vetted sources. 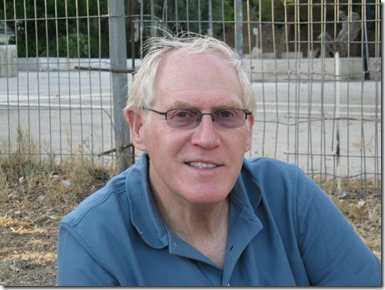 The author in front of security fence in Jerusalem. Photo: Agi Barany

It should be obvious to anyone interested in news of the Middle East that the correspondents working for AP, AFP, BBC, and The New York Times, must be immensely overworked and under intense pressure to increase productivity.  This assumption is  based on the observation that many of their articles are replete with borrowed and hackneyed phrases while they seem to make little effort to vet the authenticity or validity of the statements to the situation being described. Among these oft repeated phrases are items such as  “Israeli settlements which are deemed illegal by international law,”  “occupied Palestinian territory,” and “violation of Palestinian rights.”   The writers don’t seem to have sufficient time to ask, “Who said it was illegal for Jews to live in the environs of their holiest city?”; “Was this land ever owned or controlled by Palestinian Arabs?” and “Are civil rights actually being violated and why is it so?”

When I took a basic journalism course in college over 40 years ago, one of the first things I learned was the importance of vetting the source, authenticity, and validity of the information being used in an article.  I was warned that only one article with misinformation can destroy the credibility and reputation of an experienced journalist. Yet this basic cardinal rule of journalism doesn’t appear to be relevant to today’s Middle East correspondents.  It seems totally acceptable to use these subjective, hackneyed phrases without regard to examining their veracity.  Middle East correspondents must be so overworked that they can’t be bothered with such seemingly trivial details.

Writers must realize that productivity is useless without accountability. A writer may be prolific, but if his articles lack credibility, they won’t win him a Pulitzer Prize, except perhaps in the strange and twisted world of Middle East journalism, where different standards seem to apply.  Standard and accepted rules of journalism should be applied cross-situational in an unbiased manner, not selectively applied according the writer’s preferences and conveniences.

So when a writer decides to insert the phrase, “Israeli settlements which are deemed illegal by international law,” he should first ask, “Which international law is being violated, which legal experts or court of law decided that it was illegal, was the decision definitive and binding, or are there legitimate alternative opinions which raise doubts about the decision?”  These are questions which should be asked by every writer and editor concerned with accountability as well as productivity.

Similarly, when a writer uses the oft repeated phrase, “occupied Palestinian territory,”  he should understand the meaning of each of these words, which may have mendacious connotations. The writer should ask, “Who is considered a Palestinian, and who actually owned, controlled, or occupied the land before 1948 and between 1949 and 1967, why is the land still a territory with an elusive final status, why should Arabs have more right to settle this land than Jews, why should Jews be barred from establishing communities in this land?”

When a correspondent speaks of “violating Palestinian rights,” he is openly displaying his bias and ignorance.  If he would devote a little time and effort to travel around Israel, he would see Arabs freely intermingling with Israelis in most transportation, recreational, commercial, and health care facilities, with no apparent discrimination or concern for their personal safety. Arabs are so happy in Israel that they don’t want to leave.  If they were really “suffering” and “oppressed” wouldn’t they be eager to leave the country?  The Muslims fleeing to Europe and North America are not coming from Israel, they are coming from other Muslim countries. Writers should be more concerned about the civil rights of Israelis who need to have armed guards, heavy metal gates, and concrete barriers at every school and shopping mall to thwart the efforts of Arab terrorists eager to inflict harm on the civilian population.  The rights of Israelis to live in safety are being abused when they have to suffer the indignities, expenses, and inconveniences of enduring the extensive security measures required to keep their children safe from harm.  While it may be true that Israeli security forces operating in Judea and Samaria have used abrasive procedures with the civilian population, the incidents reported were usually during security operations when soldiers are required to follow operational procedures to ensure the integrity of the operation as well as their own safety.  When the Arab terrorists stop hiding among the civilian population and cease their efforts to kill Jews, then these regrettable incidents will no longer occur.

I could easily provide hyperlinks to articles that would provide answers to the questions listed above, but if I were to do so I could be accused of selectively choosing articles that are favorable to Israel.  Instead, I would like to challenge Middle East correspondents to find the answers on their own using the research skills that they learned in Journalism 101, and seemed to have forgotten.  If they insist on using biased, hackneyed phrases in their articles, they should at least provide supportive evidence from vetted sources.  More likely, their research will provide them with evidence to the contrary.