A 21st Century Exodus: Dina’s Journey from Egypt to Jerusalem 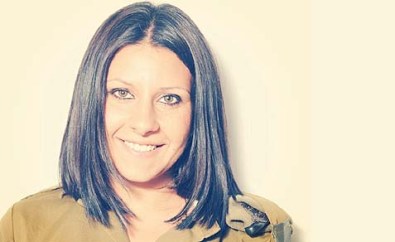 This isn’t Cpl. Dina Ovadia’s first Passover in Israel. Slowly, slowly she seems to be moving away from her Egyptian past and becoming further ingrained in her Israeli present.
Instead of thinking about her bittersweet childhood in the Egyptian city of Alexandria, Cpl. Ovadia fills her time with her army service and in preparing her home in Rimonim, in Samaria, for the Passover holiday. Today it is possible to say that she is far more Dina Ovadia than she is Rolin Abdallah – the name her family gave her as a security measure for a Jew living in an Arab country. But Dina herself grew up totally unaware of her Jewish heritage.
Dina is telling her winding, unbelievable story for the umpteenth time, but her eyes still well up with tears. Ovadia, now 22, left her family home in Alexandria for the last time as a young and curious 15-year-old girl. All she wanted was to fit in.
“Everyone always looked at me as though I was something different, the ugly duckling in the class. They asked me why I dressed the way I did, and why I spoke with my parents during the breaks, and why this and why that. I myself didn’t understand where it all came from. But I always had friends,” she says in impeccable Hebrew with a slight Arabic lilt. “I didn’t have a religious background in Christianity or in Islam. I never knew what I truly was. My parents didn’t keep the [Jewish] traditions, and I always assumed that we were secular Christians.”
Dina’s childhood detachment from her heritage gives unique meaning to every Shabbat candle she lights now and to every Jewish holiday that she did not know. And Cpl. Ovadia’s story is the Passover story, thousands of years old, expressing itself again in the 21st century.
“I have surely seen the affliction of My people that are in Egypt, and have heard their cry by reason of their taskmasters; for I know their pains” – Exodus 3:7